Why We Invested: Accacia

By Deepanshu Pattanayak and Karan Mohla

The threat from climate change looms large and will require a multi-pronged approach to combat it over the coming decades.

As per a UN Climate change report, we are on track for a 2.5°C warmer planet by the end of the century. Natural disasters like forest fires, hurricanes, floods and draughts have become more frequent and more intense. Livelihoods and economies are being thrown out of gear due to these climate vagaries and world leaders and corporates are beginning to take a more serious note of what climate activists have been saying for the last decade.

Everyone is scrambling to reverse climate change and the race to net zero is on.

At the recently concluded COP27 summit, global leaders pledged efforts and funds to limit the rise of global temperatures to 1.5°C above pre-industrial levels. It is estimated that global transformation to a low-carbon economy is expected to require investments of at least $5 trillion annually. At COP27, the UN Secretary-General announced a $3.1 billion plan to ensure everyone on the planet is protected by early warning systems (EWS) within the next five years.

As of 2022, ~140 countries have made their net-zero pledges covering 80% of global emissions. Developed economies in Europe, US and Australia already have aggressive carbon reduction targets. India intends to get to net-zero emissions by 2070. Major Indian conglomerates like Reliance and HUL have announced their intent to get to net-zero carbon emissions by 2035-2040. Sustainability reporting has been mandatory for all publicly listed companies in India. In SEA, the Singapore Exchange has also mandated carbon accounting for listed companies with a threat to delist them if they don’t adhere by 2024.

Globally, the real estate sector accounts for nearly 40% of energy-related carbon emissions in constructing and operating buildings. Of those total emissions, building operations are responsible for 27% annually, while building and infrastructure materials and construction (typically referred to as embodied carbon) are responsible for an additional 13% annually. 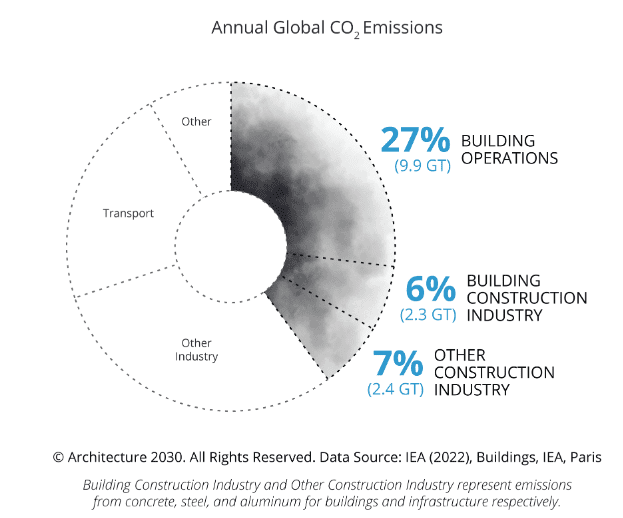 This has made governments and regulators take note and place more stringent measures on the real estate sector to reduce carbon emissions through constant monitoring and reporting. In March 2022, the US SEC proposed a rule which would need all REITs and owners of any publicly traded real estate to report Scope 1,2 and 3 emissions. New York City has set a target of 40% drop in GHG emissions by 2030 while Los Angeles needs new buildings to be net-zero carbon by 2030. In Q4’20, the EU passed regulations requiring a 60% reduction of carbon emissions in buildings by 2030 along with an 18% reduction in heating and cooling demand. Defaulters will pay a substantial penalty.

Major corporates like Microsoft, Amazon, and BP have all announced significant carbon reduction goals over the coming decades. Google, one of the largest tenants in New York City, has aggressive carbon-neutrality goals for its offices. Real estate investors like Blackrock have announced that it will consider carbon emissions when evaluating investment decisions.

However, for us to act and reduce carbon emissions, it is important to have a system in place to measure them accurately. Traditionally, ESG consultants have been tasked with this responsibility to periodically measure and report carbon emissions for corporates. However, the aggressive carbon reduction targets require continuous monitoring and mitigation measures. And this is where carbon accounting SaaS platforms like Accacia are expected to play an increasingly important role in the coming decade.

Accacia intends to be the single source of truth for real estate managers and investors to effectively measure, monitor and report their carbon footprint. It intends to capture Scope 1,2 and 3 carbon emission data either through proprietary data collection or third-party integrations and enable continuous monitoring and reporting of carbon emission data along with inputs on what corrective measures to take to reduce them.

Accacia is ably led by the leadership team of Annu Talreja, Jagmohan Gaarg and Piyush Chitkara, with the right crossover of real estate, climate and product experience. Annu is a 2nd time founder with nearly 15 years of experience in the real estate sector across OxfordCaps, Marriott, EY and Jurong and AECOM and has spent time working on carbon footprint measurement. Jagmohan is an experienced B2B sales leader in real estate and Piyush has 10+ years of experience leading engineering projects across Cisco and Rakuten.

From our very first meeting with them, we have been amazed by the clarity and insights they have on the industry and the product they plan to build. While they will initially focus on the Indian and SEA markets, they will eventually expand to the US and European markets where there is a bigger need for such tools given their aggressive net zero targets.

Climate focused tech start-ups and dedicated long-term capital will play a critical role in this along with corporates across industries and governments. At B Capital, we are committed towards ensuring a sustainable future for everyone and our investments in Accacia, Overstory and Patch is the beginning of our efforts to empower entrepreneurs who are building towards this goal through their respective innovation platforms. We are thrilled to partner with Annu, Jag and Piyush and support their vision of achieving a net-zero carbon planet.