Do low Average ACVs affect your ability to go public?

This article was written by Senior Principal Mike Fernandez.

VCs look to invest in companies that can go public. Although M&A exits occur more frequently, public liquidity events drive the majority of value creation and returns for VCs’ portfolios. So a commonly asked question is, just what does a public company look like?

The world of enterprise software is often viewed as having a relatively defined “playbook” for what a company and its go-to-market motion should look like, and that stereotypical playbook often involves outside sales from bag-carrying reps. Despite the recent high profile IPOs of companies with small contracts and more inside sales or product-led growth motions (e.g. Zoom, Slack), there is still a lingering perception in some corners of the investment world these companies are outliers, and real success in enterprise software requires large 6- or 7-figure contracts from Global 2000 customers.

To see if this was true, I analyzed key B2B SaaS IPOs from 2019 and 2020. Note that I’ve excluded companies with a heavy services component (e.g. Palantir) and companies that were not venture-backed at the time of their most recent IPO (e.g. Duck Creek). Did this cohort of newly public companies require Average Annual Contract Values (ACVs) over $100k, the commonly perceived threshold for enterprise sales? No. The results were quite clear — a B2B SaaS company can go public with almost any level of Average ACV: 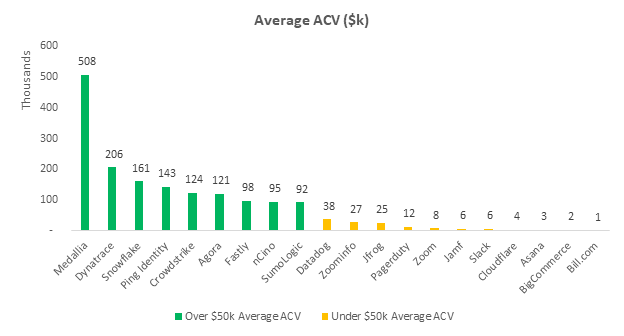 Although these companies have a 300x spread between highest and lowest Average ACVs, there was an interesting split that emerged — a relatively large gap in Average ACV between SumoLogic at $92k and Datadog at $38k. This isn’t a random coincidence. That gap occurs right in the range where Average ACVs are probably too small to support the cost of a direct outbound enterprise sales force, but too large to easily close prospective customers with purely inside sales or product-led growth. Most of the companies above have some mix of go to market approaches to target different customer segments, but each company typically has a dominant approach that drives its overall growth trajectory.

That highlights the key to success — finding a go-to-market approach that is the right fit for the value generated by the company’s product, the pricing levels it can achieve, the target customer segments, and the potential for a land-and-expand motion over time. While these companies’ Average ACV’s hint at what those primary go-to-market motions might be, a deeper dive into their sales metrics helps explain what is happening behind the scenes.

Gross margin-adjusted Payback Period, which is a rough estimate of sales efficiency, looks at the number of months that a new customer would need to remain with a company before churning in order for that company to break even on its investment in sales & marketing to acquire that customer. Here, we see that the low Average ACV companies generally break even on their their customer acquisition costs a full year before the larger companies: 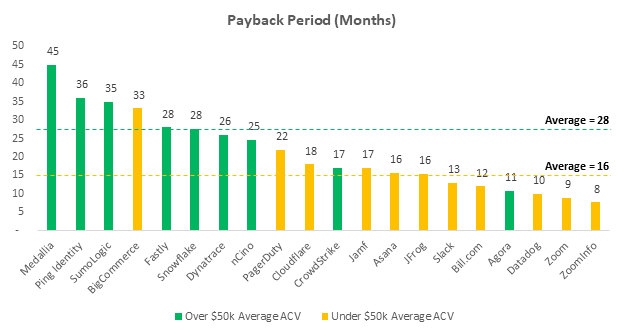 This might seem surprising at first given the much lower revenue per new customer for low Average ACV products. However, it makes sense for a couple of reasons:

Rather than looking purely at revenue, Payback Period is often a measurement of gross profit per customer relative to the cost of acquiring the customer. This is an important consideration because it reflects how much cash is left over to pay for sales & marketing (as well as other G&A) after serving up the product. It turns out there is a relatively strong inverse correlation between Average ACV size and gross margins: 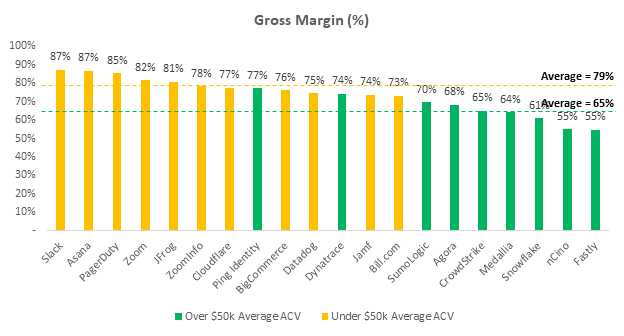 Net Dollar Retention is a key metric for understanding how valuable a company’s average customer can become over time. It measures how much upsell & expansion from retained customers outweighs churn & contraction from lost or downsized customers. A company with net retention over 100% will see some revenue growth even if it fails to add a single new customer. The newly public companies in our target set do well on this metric, but the High Average ACV companies do slightly better, driven by the incredible performance from companies like Snowflake and CrowdStrike: 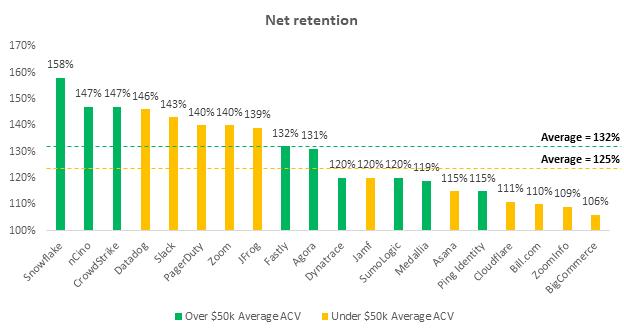 A company whose Average ACV is over $50k is likely selling disproportionately to large enterprises rather than to small and medium sized businesses. These large customers can be painful to acquire, with long and slow sales cycles. However, once acquired, they tend to be quite sticky. It’s normal to see average gross churn rates for SMB customers that are 10–20% higher than for large enterprise customers. Enterprise customers also typically present significant upsell opportunities, allowing expansion into new business units or geographies over time. This means that while it may take longer to pay back the initial sales and marketing cost to acquire one of these large accounts, the lifetime value of one of these customers can be quite high, making the upfront cost of acquisition worth it in the long run.

The next question naturally becomes whether or not the market values companies differently based on those customer sizes and respective go-to-market approaches. It turns out that there does not appear to be any correlation between a company’s Average ACV and the multiples it trades at in the public markets:

Overall, factors such as the company’s growth trajectory, profitability and cash generation potential, and market dominance all appear to be more important factors than raw customer size.

Based on the metrics above, it is clear that an enterprise SaaS company can go public at any level of Average ACV, and the public markets will be receptive.

It is important to remember that overall company size still does matter. While low Average ACVs in and of themselves do not appear to be a cause for concern, a low Average ACV combined with a small number of potential customers will make it incredibly hard to achieve a public-scale company, which typically requires Total ARR of at least $100m. The low Average ACV B2B companies that went public in 2019 and 2020 made up for this by being very horizontal in nature — almost any business could become a potential customer.

In addition to finding product-market fit in sufficiently large markets, the companies above all found go-to-market motions that support rapid growth and appear to be sustainable over the long run. Companies with high Average ACVs from large enterprise customers invest in more expensive direct sales approaches and professional services, knowing that they will retain and upsell customers over time. Companies with low Average ACVs optimize for shorter, low-touch sales cycles, product-led growth, and minimal professional services. In both cases, the key is to match overall sales and marketing spend against the total expected value of a customer over time. Doing so unlocks a repeatable sales motion that leads to the scale and consistency that public markets investors want to see.